How Does VPN Work?

It’s hard to not have heard about VPN (which is short for Virtual Private Network, by the way) in this day and age.
What is it? In very simple words, it’s a tool to make it look like you’re connecting to the Internet from another place and not from your actual current geoposition, while also protecting your requests and data that you send out by connecting to the Web.
Think of it as a magic wand that can make you (your device) appear in any location with one gentle sweep like “Spoof!”, thus hiding your real whereabouts. On top of that, it covers your connection with a powerful cloak that protects your online deeds from various prying eyes and data stealing monsters.
If we go just a little bit more technical, VPN forwards your traffic (all the information you send to and receive from the Internet) through a secure tunnel to one of the VPN service provider’s servers (which can be located in a lot of places all across the globe, depending on the provider).
That’s the “Spoof!” by the magic wand.
Only after passing that server, your encrypted data with hidden geo-location and IP adress gets sent to the website you’re trying to reach, thus protecting your privacy and giving you anonymity.
That’s the magic cloak.
As you’ve probably figured by now, the VPN provider that does all this magic for you gotta be the one you really trust. A lot of VPN providers have a privacy policy and zero logging policy (meaning they don’t collect and store your data) so if you’re sure they’ll stick to it, there shouldn’t be a problem.
VPN provider is like a wizard who does the magic. He has to be the one you can trust.

How Does VPN Actually Work? (Gets a Bit More Technical)

Let’s start with your home. When your PC “talks” just with your smartphone and other devices and vice versa, it’s all part of your private home network. And it doesn’t go to the Internet, it stays inside your house.
But the moment you open a Web page somewhere out in the Internet, that data flows through your modem and out across the Web. And it flows until it gets to the server of the destination Web page.
While all that data is rushing around the internet it needs to know where it's going. And for things to know where they're going they need an address. It's the same with the postal service as it is the same when you want to go and visit somebody. And it's the same with data on the internet. 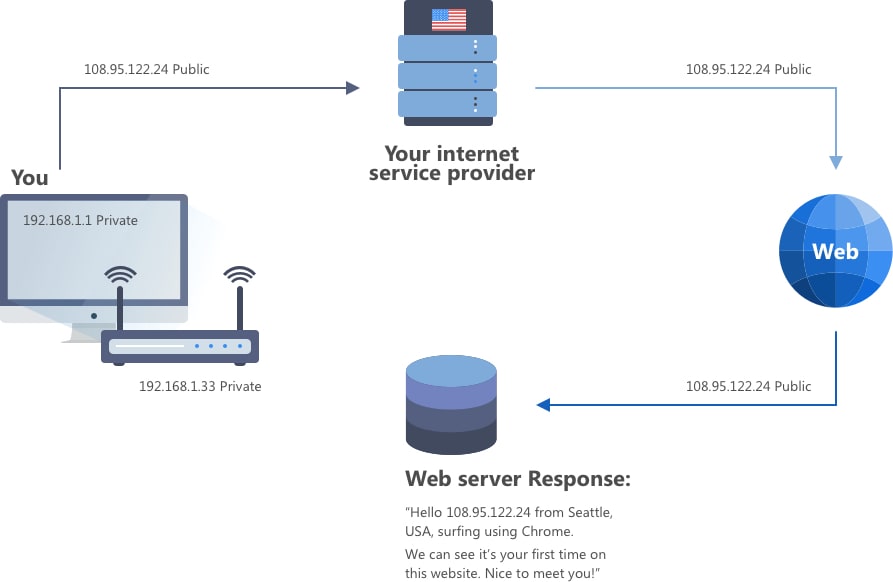 Now, there are different layers of addressing or different types of addressing that go on but at the highest level each of these packets of information have what's called an IP address.
The IP address is four sets of digits from 0 to 255 with dots in between, like 255.255.13.11, 12.13.23.169, etc. Your modem has probably been assigned an IP address from your ISP and what happens is that when your data goes through the internet, every piece of equipment it touches, every router, every server it touches knows that IP address.
Especially when it gets to the web server at the other end: that web server will probably log that IP address and log what it is that you've requested there. It is done not because it's trying to spy on you, but because it’s trying to collect data about the number of people that clicked onto the website, when the peak periods are. For data, traffic analysis, basically.
So, what a VPN does is it allows your data to go over an encrypted connection from your house (or smartphone) to another point on the Internet, probably in another country, and then make its way onto the public Internet. Like a rabbit diving down a hole which leads to another exit somewhere else.
The upshot of this encrypted connection is that your data has the IP address that is assigned to the other end of the tunnel, not your home. That means that when you connect to a web server the IP address seen by the server is that of the VPN endpoint, not your home IP address. So now if you access a sensitive site then your IP address and location are not exposed. 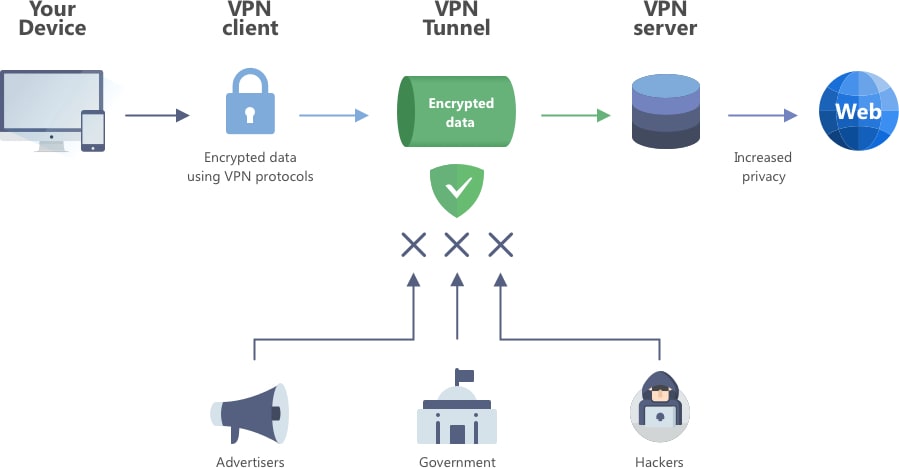 Once you choose VPN provider, configure its VPN and connect, your device will make an encrypted connection to the VPN server in whichever country you picked. Now all your Internet traffic (including DNS lookups) will go down this encrypted tunnel before it hits the public Internet. When it exits the tunnel and travels on further it will be baring the IP address of the VPN server and not your IP address. When data comes back it heads first to the server and then the server sends it back to you along that encrypted tunnel.
If you are wondering, yes, the data still needs to go over your Wi-Fi to your router/modem and then to your ISP. But now all that data is encrypted and it isn’t decrypted until it hits the VPN server. This way your local telco can’t see what you are accessing, and neither can any government or state institution.
The encryption is done thanks to the VPN security protocols, so let’s take a look at the most common ones.

VPN security potocols are the main tools that make data encrypting possible, which is crucial for effective privacy protection. You can think of it as the material of the magic wand.
1) Layer 2 Tunneling Protocol (L2TP)/IPSec. L2TP is a VPN protocol that doesn’t encrypt data by itself. That’s why it’s paired with IPSec encryption. One of its primary advantages? It’s available on most devices and operating systems and provides a high level of security. The downside? It can result in slower connections. That’s because it uses the double encapsulation process.
2) Secure Sockets Layer (SSL) and Transport Layer Security (TLS). SSL was the encryption protocol VPNs generally used before 2015. It has evolved into TLS for encryption of data traveling to an SSL VPN server. One of the reasons that SSL has been largely replaced in VPNs is due to the large number of vulnerabilities discovered in the protocol.
3) Secure Socket Tunneling Protocol (SSTP). This Microsoft-developed protocol is considered highly secure and easy to use, but it doesn’t work as well on platforms other than Windows.
4) Internet Key Exchange, Version 2 (IKEv2). This protocol is based upon IPSec. It’s considered quite secure and fast. One downside? It can be blocked by firewalls.
5) Open VPN. Popular and up-to-date VPN protocol. It combines high security and speed. Because it’s open source, numerous third parties maintain and update the technology.
6) WireGuard. A break-through protocol that is even faster and more stable than OpenVPN and IKEv2.
7) AdGuard protocol. The crucial thing about our own protocol is that it cannot be distinguished from browsing. It looks just like HTTPS traffic — that’s why it’s very hard to block or simply to detect it. And on top of that, it is swift and is based on powerful mechanisms of the HTTP/2 protocol.

What Does VPN Hide?

A VPN can hide a lot of information that can put your privacy at risk if stolen. Here’s top five:

It’s no secret where you go on the internet. Your internet service provider and your web browser have a record of just about everything you do on the internet. A lot of websites you visit also keep a history. Web browsers can track your search history and tie that information to your IP address.
Here are two examples why you may want to keep your browsing history private. Maybe you have a specific medical condition or decease and you’re searching the web for information about its treatment. Guess what? Without a VPN, you’ve automatically shared that information and may start receiving targeted ads that could draw further attention to your condition.
Or maybe you just want to buy the cheapest airline tickets for a flight. The travel sites you visit know you’re looking for tickets and they might display fares that aren’t the cheapest available.
These are just a few isolated examples. Keep in mind your ISP may be able to sell your browsing history. Even so-called private browsers are not so private.

2) Your IP address and location

Anyone who captures your IP address can access what you’ve been searching on the internet and where you were located when you searched. Think of your IP address as the return address you’d put on a letter. It leads back to your device.
Since a VPN uses an IP address that’s not your own, it allows you to maintain your privacy and search the web anonymously. You’re also protected against having your search history gathered, viewed, or sold.

3) Your location for streaming

You might pay for streaming services that enable you to watch things like professional sports. When you travel outside the country, the streaming service may not be available. Not so with a VPN — it allows you to select an IP address in your home country. In effect, you’re protected from losing access to something you’re paying for. You may also be able to avoid data or speed throttling, as well.

A VPN can protect your devices, including desktop computer, laptop, tablet, and smart phone from prying eyes. Your devices can be prime targets for cybercriminals when you access the internet, especially if you’re on a public Wi-Fi network. In short, a VPN helps protect the data you send and receive on your devices so hackers won’t be able to watch your every move.

5) Your web activity — so you can keep online freedom

Any cons to using a VPN?

VPNs are a great solution to the privacy issues we have mentioned, but VPNs aren’t a perfect. In fact, there are a few drawbacks that you should keep in mind.

Since you are intentionally sending your data half-way around the world before it even gets a chance to head off toward the right server then VPN connection speeds will be slower than your normal, non-VPN connection. Also your VPN provider will only have a certain amount of resources. If the VPN server is overloaded, because there are too many clients and not enough servers, then connections speeds will drop. The same is true for server bandwidth.

Some online services have a system to detect the use of VPNs and if they think someone is connecting via a VPN they can block access. For example, Netflix has made some noise about blocking VPN users in the past.

Shield your data from being siphoned through shady Wi-Fi hotspots thanks to encryption of data and maskep IP.

The use of VPNs is outlawed in some countries

The use of VPNs is outlawed in some countries, precisely because they offer anonymity, privacy, and encryption.
52 Locations Worldwide
From Americas to Australia, from Europe to Asia. 52 locations, with plans to add more soon. All to guarantee the best response times and maximize your convenience.