版本号：1.2.3 发布日期：2022年4月22日
We fixed important bugs — like on purpose — for the beautifully numbered version: 1.2.3. We got rid of the application freeze when disabling VPN, fixed server pings and made sure that the connection, as well as the entire application, is more stable. And we also updated the VPN client to make sure you're happy.

[Enhancement] Updated VPN client to v0.9.98 #253
[Fixed] AdGuard VPN freezes when disconnecting #175
[Fixed] Real IP is shown once PC wake up after the sleep/hibernation #250
[Fixed] Active network connections outside the dedicated port drop every some minutes in SOCKS5 mode #226
[Fixed] Server speeds differ in VPN app and extension #245
[Fixed] "Split tunneling" displays an incomplete list of applications #256
版本号：1.2.2 发布日期：2022年3月31日
This patch has many important bug fixes, one update, and a quote from Bill Gates. We noticed that there was an error when connecting to a VPN for a long time, and some users were periodically losing the connection for a few moments. Fixed it. As Bill Gates said, “It's fine to celebrate success, but it is more important to heed the lessons of failure.” And lastly, we updated the VPN client. ​

​[Enhancement] Updated VPN client to v0.9.76 #236
[Fixed] Long-lasting connection ends with an error #231
[Fixed] VPN is disconnected every 10-15 min #238
版本号：1.2.1 发布日期：2022年3月25日
We really want you to enjoy using AdGuard VPN. That's why we're swiftly releasing a patch today to fix a few unpleasant bugs that leaked into production. For example, some users encountered crashes when launching the app. We also received several complaints from users who could not log in to the app. There were other minor issues that we resolved as well. We also took the opportunity to add some translations and update AdGuard VPN engine — the VPN client.

[Enhancement] Updated VPN client to v0.9.67 #227
[Fixed] The app crashes on launch after VPN client connection fails #220
[Fixed] Unable to log in to the app #224
[Other] Changed the System default DNS server name and its description #199
版本号：1.2 发布日期：2022年3月17日
We were wondering what to improve this time and decided to go ahead and improve everything. Meet AdGuard VPN v1.2 for Windows, part of a major AdGuard VPN update for all seven platforms! ​ We completely reimagined the Exclusions section: now you can add Internet services with all their subdomains to Exclusions lists just in one click! And we’ve also added DNS filtering to AdGuard VPN, and it opens new horizons for your secure browsing. ​ The other changes are less noticeable but no less important: we fixed some bugs that were preventing you from enjoying AdGuard VPN and updated the VPN client.
​ [Enhancement] Exclusions 2.0 ​
Exclusions 2.0 — the name itself reflects the extent of the changes that the section came through. Previously you could only add sites to Exclusions by entering their domains manually, but now you can do it in one click.
​ 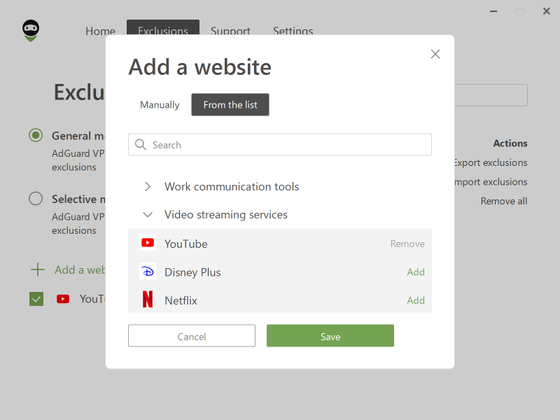 ​
​​We divided the most popular Internet services into eight categories, such as Shopping, Social Networks, and Streaming Music Services, and added all their subdomains (e.g., *.google.com) and domain names with different top-level domains (e.g., google.ru). That way, when you tick the check box beside any service, you add all addresses associated with it to the Exclusions. Convenient, isn’t it? And one more thing to mention here: now it is possible to add third-level domains to Exclusions lists.
​ [Enhancement] Custom DNS support
Finally, this feature is implemented in AdGuard VPN! ​ 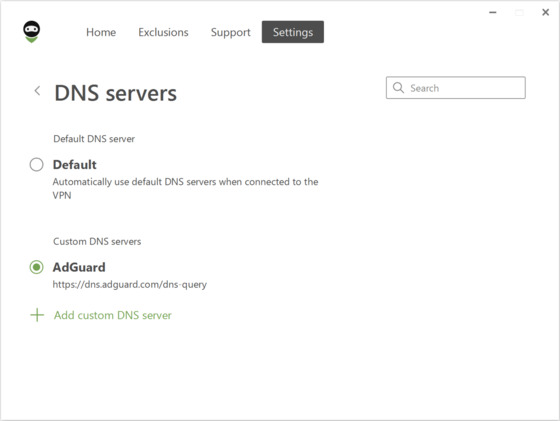 ​
What does it mean for you? From now you needn't rely on a DNS server provided by your ISP by default, you can add a custom DNS server (or servers). We recommend adding AdGuard DNS, which not only encrypts your DNS traffic but also identifies requests to malicious sites and redirects them to a “blackhole". ​

​
[Enhancement] Updated VPN client to 0.9.57 #217
[Fixed] System tray icon and pop-up notification icon are blurred #123
[Fixed] With the system dialog window opened the app can’t be closed properly #173
[Fixed] Split tunneling doesn't work for applications from Microsoft Store
[Fixed] The service works even though the app is closed
[Fixed] VPN exclusions rule doesn't work if it was added when tunnel was disabled #187
[Fixed] Custom DNS server switches to default automatically after refreshing the app
[Other] Updated translations
版本号：1.1.1 发布日期：2021年11月12日
This version doesn’t contain any changes for most of the users yet it fixes a major mistake and improves the update process of AdGuard VPN for Windows. Read more about it here.
Unfortunately, the new version has to be installed manually.
版本号：1.1 发布日期：2021年10月27日
Not much time has passed since the first release of AdGuard VPN for Windows, but for some of you it has turned into a period of lingering anticipation. The day has come — and we are happy to present AdGuard VPN for Windows v 1.1. Sure you’ll love it!
So what have we done? In addition to fixing minor bugs, identifying the causes of glitches and updating the VPN client, we've made two other important changes. First, AdGuard VPN for Windows now supports QUIC protocol, which will give you better connection quality in non-ideal conditions. And secondly, we've made it easier to search for apps to add them to exceptions, by moving this function to the main settings section.
Now it's even simpler to be an elusive ninja with AdGuard VPN for Windows. Enjoy!
[Enhancement] Windows: QUIC support
We switched to using the HTTP/3 and QUIC protocols to communicate with the server. HTTP/3 and QUIC is the latest, most advanced version of HTTP. Unfortunately, the new protocols won't affect speed when the connection is fine and stable, but their benefits will show up when the connection is worse – for example, on mobile devices or when connecting to public Wi-Fi. 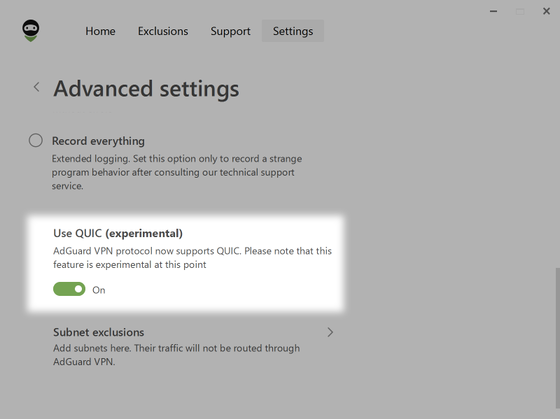 There are several obvious advantages of the new protocols – they won't cause packet retransmissions and Head of Line Blocking (or HoLB) queues, and they will also allow connection migration. Without being too technical, the main advantage is the already mentioned improvement of connection quality in non-ideal conditions.
[Enhancement] Adding apps to the exclusions list has become more user friendly
There was a possibility to exclude apps from tunneling, but technically, it was implemented for “advanced users” only — you had to choose a path to the app. 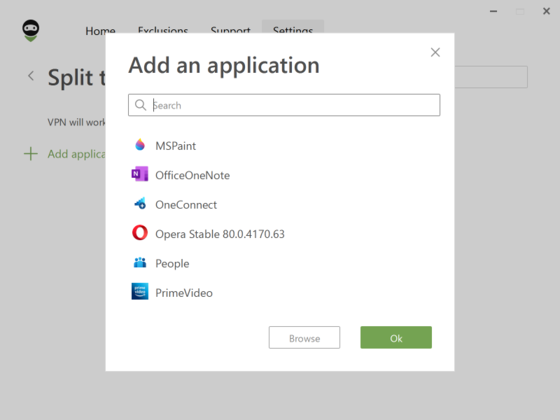 Now there is a separate section that is more user friendly. The option to exclude apps is rather useful and crucial, at least for solving app compatibility problems.

[Enhancement] Update VPN client to 0.8.147 #165
[Added] AdGuard VPN update error message when installing another program
[Fixed] Adguard VPN keeps logging out #95
[Fixed] AdGuard VPN doesn't connect automatically when it wakes up from sleep mode #146
[Fixed] Can't save websites with domain ".community " to exclusions #131
[Fixed] Protect all the files in programdata
[Fixed] Locations list is empty after login
[Fixed] The app doesn't update immediately after clicking 'Install update'
[Other] Updated tray menu
版本号：1.0 发布日期：2021年8月2日
AdGuard VPN for Windows lunges into the release stage! Well, we just wanted to make things right… and ended up making them even better 😁
It has not been a cakewalk, but we finally made it. So let us introduce you the full-fledged desktop VPN app with multiple-language (10!) support and a bunch of advanced settings. What a day! 🎉
AdGuard VPN
已开始下载
点击箭头指示的按钮开始安装。